"Ready or Not Here It Comes" - The LIBOR Transition Is Upon Us: Free-to-attend as part of the iGlobal Forum Client Series

We are joined by Joyce Frost, Riverside Risk Advisors, as she leads sessions on the LIBOR transition.

Borrowers from the private equity, leveraged loan, real estate, corporate, and infrastructure/project sectors - join us for an in-depth and interactive discussion that will bring together an online community of experts to discuss the LIBOR transition's latest developments in real-time. Hear directly from Tom Wipf, ARRC Chairman, and Tess Virmani, LSTA Associate General Counsel and Executive Vice President, as we pass significant preparedness milestones in the debt and derivative markets. Ask questions and learn what it means for you.

Borrowers that rely on LIBOR in their debt and derivative contracts need to be prepared for a world with no new LIBOR loans after 2021. Start addressing your legacy and new issuance LIBOR to-do list. We want you to be ready, and the regulators expect it.

This webcast assumes modest familiarity with terms including SOFR and the ARRC - for the basics, please visit: https://www.liborxchange.com/resourcehub

This event is part of the iGlobal Forum Client Event Series, virtual events hosted by iGlobal Forum in partnership with some of the most trusted firms in the industry.

These events are free to attend, and bring together thought-leaders, active industry players and hundreds of attendees in a knowledge exchange that will prepare you for overcoming challenges, improving business processes and optimizing future opportunities.

Joyce Frost is co-founder of Riverside Risk Advisors and has over 25 years of experience in the interest rate, currency and credit derivatives markets. Joyce is a member of ARRC’s Business Loan Working Group, Accounting and Tax Working Group, Tax Sub-committee and Non-Financial Corporates Working Group.

Prior to founding Riverside, Joyce was a Senior Vice President of Cournot Capital Inc, a highly successful seller of credit protection sponsored by Morgan Stanley. In her capacity, Joyce assisted in ramping up a portfolio of over $25 billion in swap notional, securing triple AAA credit ratings from three agencies, issuing $250 million of Senior Debt, and facilitating the successful sale of Cournot to an affiliate of Magnetar Capital in 2008.

Between 1985 and 1995, Joyce was responsible for marketing fixed income derivatives to corporate, project finance, real estate and other end users. Joyce successfully concluded hundreds of transactions ranging from plain vanilla swaps to the most complex cross-border project finance transactions in Latin America. She started her fixed income career at The Northern Trust Company, continued at Chase and spent five years at Sumitomo Bank Capital Markets.

Joyce is Co-Editor of the Handbook of Credit Derivatives (McGraw Hill, 1999) and author of many articles published on the use of derivatives by corporations and other end-users. She has spoken at dozens of industry conferences throughout North and South America and Europe.

Joyce was honored to receive the Legacy Award for the 2019 Market Choice Award: Women in Finance in New York City.

Jason is the Head of Libor Transition for Goldman Sachs.

Jason is responsible for leading the firm's London Inter-bank Offered Rate (LIBOR) transition effort. He is a member of the Alternative Reference Rate Committee, which is the public-private sector working group to help ensure the market's successful transition to alternative rates, and a member of the Commodity Futures Trading Commission Market Risk Advisory Committee's Interest Rate Benchmark Reform Subcommittee. Prior to assuming his current role, Jason was deputy head of Liquidity Solutions for Goldman Sachs Asset Management (GSAM). From 2010 to 2017, Jason was head of International Liquidity Portfolio Management for GSAM, responsible for the management of international liquidity portfolios. From 2007 to 2010, he was cohead of the Secured Funding team on the Central Funding desk for the Investment Management Division. Prior to that, Jason worked in the portfolio and risk strategy group of GSAM's Fixed Income team from 2004 to 2007. Before joining GSAM, he was an analyst in Fixed Income Operations. Jason joined Goldman Sachs in 2000 and was named managing director in 2012. Jason was recognized by Financial News as one of the “FN 40 Under 40 Rising Stars of Asset Management” in 2013 and 2014. Jason serves on the Board of Trustees of Fairy Bricks. Jason earned a BA in Economics from the University of Michigan in 2000.

Tess is active on numerous ARRC working groups and focuses on developing market standards, offering guidance to the market through market advisories, and maintaining and augmenting LSTA’s extensive suite of form documentation. 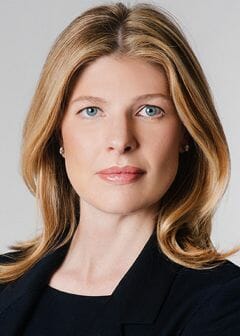 Tess focuses on developing market standards, offering guidance to the market through market advisories, and maintaining and augmenting LSTA’s extensive suite of form documentation. She also leads the LSTA’s sustainable finance and ESG efforts. In addition, Tess participates in the LSTA’s policy initiatives, including market advocacy and spearheading industry solutions to market developments, such as the transition to replacement benchmarks.

Prior to joining the LSTA, Tess practiced as a finance attorney at Skadden, Arps, Slate, Meagher & Flom LLP in New York. She received a B.S. in International Politics from the Walsh School of Foreign Service at Georgetown University and a J.D. from Fordham University School of Law. She is admitted as an attorney in New York.

Tom is the Chairman of the ARRC and is also responsible for Morgan Stanley’s transition efforts to alternative reference rates to replace LIBOR through the firm’s Global LIBOR Transition Steering Committee.

Chairman of the ARRC

This group, spanning ISG, Wealth Management and Investment Management, will ensure that all businesses and infrastructure organizations have a consistent set of Firm-level guidelines, their own transition plans and accountability for transition readiness before year-end 2021.

Prior to being named Vice Chairman, Tom was the Global Head of the Bank Resource Management Division where he was responsible for the firm’s secured funding, securities lending, global hedging and collateral management activities.

In April 2019, Tom was named Chair of the Alternative Reference Rates Committee (ARRC) by the Federal Reserve Board. The ARRC is a group of private-market participants convened to help ensure a successful transition from USD LIBOR to a more robust reference rate.

Tom was appointed to the ARRC in 2014. Tom was appointed Chair of the US Commodity Futures Trading Commission’s Market Risk Advisory Committee (MRAC) Interest Rate Benchmark Reform Subcommittee in October, 2018.

Tom served as Chair of the Treasury Market Practices Group (TMPG) from November 2007 to May 2019. Tom currently serves on the board of directors of International Swaps and Derivatives Association, Inc. (ISDA).

Join us for FREE. Full event recordings will be made available to attendees.